Cuba Cuba and more Historic Landmarks in the Golden Triangle 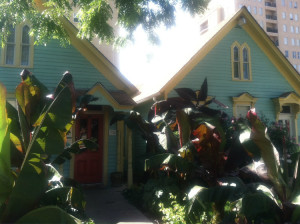 We continue to explore the Golden Triangle’s rich and dimly remembered architectural and neighborhood history. In this article we explore the only buildings with Historic Landmark designations. You can’t miss the nearly identical houses painted South Beach turquoise and yellow at 12th and Delaware. The quaint structures with the kitschy metal palm tree sculpture in front currently house the popular Cuba Cuba Café & Bar. Just around the corner on 12thAvenue is a nicely maintained red brick four-plex with lovely stained glass in the front doors. It was described by the architectural firm who oversaw its renovation in recent years as a “wonderful example of early American western residential architecture.”

Ah, but ‘twas not always so! These three buildings have undoubtedly seen much history since they were built more than 120 years ago.

Two lots in Writter’s first addition, a plat created while Colorado was still a territory, comprise the corner of 12th and Delaware. Delaware St. was known as South 13th back in the early days of Denver, making the corner known as “South 13th St. and 12th Avenue.” The lots were owned by A.C. Fisk, a former Civil War soldier from New York who owned a successful land management company in early Colorado.

In 1882, a Dutch immigrant by the name of Herman Ten Winkel purchased the property and began building the two houses on Delaware St. He moved his wife Emma and growing family into the house on the corner and maintained 1173 Delaware as a rental property. Herman finished the brick duplex on 12th Avenue in 1893. Besides being a landlord, Herman was a woodworker and cabinet maker (he had a shop at 1335 Lawrence for many years) and an inventor, taking out five patents between 1897 and 1992 for different methods of filtering water and oil. Ironically, the Ten Winkels and their friends came to refer to the two houses as “Ten Winkel Towers” because the extra half-story made them the tallest structures in the area.

In 1917, Denver was hit hard by a flu pandemic. The hospital was filled to overflowing with the sick and dying. It became so bad that winter that Denverites were asked to stay in their homes except for emergencies, fairly shutting the town down for several weeks. By the spring of 1918 the Ten Winkel family, perhaps suffering cabin fever after the flu quarantine, moved from Ten Winkel Towers to the red brick duplex around the corner. The Castlewood Dam flood in 1933 wreaked havoc on most of the buildings along the Speer Blvd. corridor, but somehow spared the buildings at Ten Winkel’s corner. A 1940 obituary in the Rocky Mountain News notes the passing of “Denver pioneer, Herman Ten Winkel.”

Of more recent historical significance, 1173 Delaware was home at one time to Edward Uhler Condon (1902-74). Condon was a physicist who worked with Oppenheimer on the Manhattan Project. After the atomic bomb was dropped over Japan in WWII, Condon refused to continue work on the next bomb and was subsequently labeled a Communist during the 1950’s McCarthy trials. In 1963 Condon moved to Colorado and taught at the University of Colorado until the end of his life. There he earned notoriety for issuing the “Condon Report” on unidentified flying objects.

In order to achieve Historic Landmark status, structures must meet criteria in 2 out of 3 categories (History, Architecture, and Geography). The two houses on Delaware (now Cuba Cuba Restaurant), constructed prior to 1887, are the oldest surviving residences in Denver. They are considered outstanding examples of Gothic style architecture with horizontal wood siding, pointed arched windows, and steep central gables.

After surviving flood, flu, and urban renewal over the years, the three buildings were structurally unsound and in poor condition. They were given a new lease on life following approval as Historic Denver Landmarks in 1999. Shortly thereafter, the structures underwent restoration and renovation: 1173-1179 Delaware was given new life as a neighborhood restaurant and the brick duplex was reincarnated as a four-plex rental at 404-410 W. 12th Avenue.