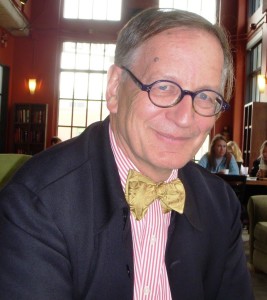 We are delighted to reintroduce Dennis Humphries, co-founder of Humphries Poli Architects, P.C. and an instrumental force in the Golden Triangle’s evolution. We say re-introduce because many of our members and neighbors have located here since the time Dennis was active in the GTA, although he continues to live and own property in the Triangle. Dennis has both lived and worked in the Triangle for most of its current existence. Humphries Poli was founded in 1994, and their first office was at 123 W 12thAvenue, the building now housing Cornerstone Apartment Services and Civitas. Humphries Poli helped in the renovation of this previously metal-sided building, and it was in this location that Dennis first started learning about how great the Triangle was (and is). As Humphries Poli grew, they bought the building now housing Akavit on Speer, and then bought 1215 Elati Steet. Further growth finally forced the firm to move to Capitol Hill in 2008 to find a large enough space, but they still own their previous locations. Humphries Poli was the architect for Century Lofts, and Dennis moved to that building in about 1998. He lives currently in the Cadillac Lofts.

Since arriving in the Triangle, Dennis has been involved in the GTA, as an individual and an architect. He participated in the first phase of developing the Avenue of the Arts on Acoma and in Civic Center’s evolution, and participated in the development of the original Neighborhood Plan. While Mickey Zeppelin was president of the GTA, the building of the Prado highlighted the need for design review of developments in the Triangle. Mickey asked Dennis to start and chair the Urban Design Committee to facilitate conversations between developer/builders and the GTA. Dennis chaired the committee for 5 years before passing the torch to Billie Bramhall, who then was succeeded by Anne Lindsay, the current chair.

The Urban Design Committee had some exciting early days. When the Justice Center was in early planning stages, Dennis and Mickey Zeppelin and Billie Bramhall had regular meetings with the City and others regarding the design, scope and functioning of such a Center in the Triangle. The GTA gained a great deal of political capitol when it gave its support to the project. In return for this support, the GTA’s “understanding” with the City gave it substantial input in a number of areas, including the architectural selection process and design review. Dennis still sits on the Justice Center Oversight Committee to ensure that the City continues to honor the parameters of that joint understanding.

Dennis became President of the Golden Triangle after Mickey Zeppelin, and served between 2002 and 2005. He was the first “resident” President of the Association, as the GTA transitioned from developers and landholders to residents. Since 2005, he has chaired the Landmark Commission and has been very involved with the Civic Center Conservancy, but has not lost his passion for the Triangle. His history with the Triangle and exceptional professional career give Dennis a unique and valuable perspective on the GTA and Triangle.

Some of his thoughts on the current and future Golden Triangle Association:

We so appreciate the institutional and neighborhood knowledge Dennis brings to the table. His influence over the years has been enormous in the ongoing development of the GTA and Triangle.