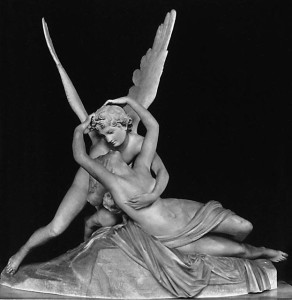 In continuing our exploration of the stories of the Golden Triangle’s Denver, Colorado neighborhood, we are looking at one of the evolution of the Golden Triangle from automobile row to its current mixture of residential and business. Many of you know Steven Erickson as half of Noble Erickson Inc, the award winning studio, which focuses on research, storytelling, and design. Noble Erickson is located in the Grand Cherokee building on Cherokee – a stone’s throw from a large amount of the Erickson’s family history and a full circle return by Steven to the Triangle.

The Family comes to Denver and carves in stone
Steven’s grandfather emigrated from Sweden to Denver via Minnesota, as did many of his countrymen, bringing strong stone cutting skills. In 1925, he started Erickson Monuments with manufacturing and a showroom at a site on 1st Avenue and Santa Fe Drive. The family lived on South Pearl, and Steven’s father and his two brothers all attended West High School. Steven’s mother’s family had emigrated from Prague in what was then Czechoslovakia to Chicago, eventually making their way to Capitol Hill in Denver. His mother went to church at the Swedish Evangelical Church, now Curious Theatre.

By the 1950’s Erickson Monuments’ growing business needed a better showroom, and they bought the site at 920 Speer, where Gigantic Cleaners is today. The building was originally designed to be a service station and therefore was part of the auto-centric businesses in the Triangle at the time. It is on a triangular site (down to zero on the surveyors point at the southern tip of the lot), and thus a triangle within the Triangle.

Roy, the middle son, eventually took over the business with help from his brother, Steven’s father, Milton. While Milton’s expertise was on the design and artistic side, Roy was an active businessman.  He was involved in many civic organizations such as the Chamber of Commerce. The West High School connections gave Roy a strong association with Denver’s Jewish community. Roy even learned Hebrew in order to better serve this loyal clientele, a skill that helped enormously when manufacturing and designing monuments.

During this period, the firm acquired a statue of Cupid and Psyche, which was showcased in the front window on Speer. This statue, a 5/8 human scale version of a sculpture by the Italian Antonio Canova (1757-1822), was 6 feet high and 4 feet wide. The notoriety of bare breasts on Speer Boulevard (quel horreur!) gave rise to a lot of press and comment. At least one lady was so afraid her husband would be distracted and drive into Cherry Creek that she called for the statue’s removal! Erickson Monuments didn’t remove the sculpture and it stood proudly as their identity and logo for many years.

The firm did more than monuments, building and restoring stonework throughout the City. Steven worked for the firm throughout his school years, spending summers doing the restoration of the Voorhees Monument and the Greek Theatre in Civic Center Park, and the Colorado Bank Building in Downtown Denver. Steven’s father, Milton, developed a strong national reputation for his expertise in making sundials. Milton’s training in engineering and mining at the University of Denver led him to become involved in the technical aspects of sundials. As a result, he created sundials across the country, including Cranmer Park in Denver.

Steven remembers many of the different business operating around Erickson Monuments. There was a radiator shop next door to the Erickson land. The Cadillac Lofts and Megastar buildings were used as a distribution center for Colorado Carnation. An automobile shop specializing in racing, Kenz and Leslie was at 9th and Acoma, now La Rumba and Charcoal. The Rooster and Moon building housed Colorado Visual Arts before becoming a V.F.W. Hall. Howard Lorton Galleries was operating on Acoma and Speer during this time. The building that eventually housed Racine’s Restaurant (where the Boulevard apartments stand) was Green’s Restaurant. This “bow and truss” building was one of many in the Triangle built with wide-open spaces perfect for automobile related uses.  Green’s had huge counters and 25 cent cups of coffee, and resembled the large cafés now found on Union Square in New York. Steven finds it noteworthy that Racine’s built a new bow and truss building at their new site on Grant—replicating their welcoming and open space on 9th.

Steve comes full circle in the Triangle and with Mickey Zeppelin
Steven had one of his first design studios at 13th and Broadway, in the West Art Building (demolished in the 1980s and now the site of the Denver Art Museum). With Onofrio Piano on the first floor, the second floor of this lovely red brick and white terra cotta building housed art studios and small creative businesses. The building was owned by Al Cohen (from whom Howard Lorton Galleries bought current their site). Steven remembers that about this time the the Golden Triangle name started getting traction. The Triangle was one of the main locations considered for the upcoming convention center. In the land rush that followed, Al Cohen demolished the West Art Building and Steven moved his business.

Upon leaving his office in the West Arts building, Steve moved to an office next to City Spirit bookstore and restaurant on Blake Street. Owned and operated by Mickey Zeppelin, many remember City Spirit as one of the first genuinely urban and exciting gathering spots in Denver. Mickey is also known as the “Grandfather” of the Golden Triangle. In the 1990’s Mickey and partners bought the derelict church now housing Curious Theatre. (This was also the church Steven’s mother had attended in its heyday.) Mickey and architect T. Copperthwaite transformed the building into the Acoma Center. The layout of the building as a church with an adjacent gathering area encouraged the event center uses and renovation.

Mickey and his partner Larry Nelson developed the Grand Cherokee residences and retail. Noble Erickson helped in the branding and marketing for this development and ended up buying their current commercial space in the building. Thus, Steven now works only a short distance from his high school days at the family business!

Steven sat on the GTA’s Urban Design Committee when it was formed in 1999, alongside the developers active in the Triangle.  From his childhood, Steven has seen the Triangle’s peaks and valleys. He watched the peak of the automobile world here and the decline of the single-family residences, and now has witnessed the long journey into the new and vibrant Triangle.