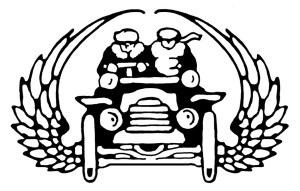 In continuing our exploration of the stories of the Golden Triangle neighborhood in Denver, Colorado, we are highlighting some previously published historical neighborhood walking tours. These tours, titled Trio of Tours, were published through a grant from History Colorado. The marvelous motoring icon, above, appeared in the “Automobile Department,” City Directory, 1918.

The evolution of the Golden Triangle neighborhood is inextricably linked to the automobile. Broadway became the “Automobile Row” of Denver. A new architecture for car showrooms, dubbed “cathedrals of commerce,” emerged as steam, electric and gas-powered machines vied for competitive advantage in the race to become the car of the future. Gasoline Alley Walking Tour explores the phenomenon of the “romance of the car.”

As Automobile Row emerged, the support businesses of service garages and stations also began appearing throughout the neighborhood creating a commercial zone and leaving a definitive architectural mark on the Triangle.

Today, Rickenbaugh Cadillac is the only operating automobile dealership in the neighborhood, but “showroom gems” still exist in the Triangle and have been renovated to house diverse businesses and cultural institutions.

The Gasoline Alley Walking Tour explores the architecture of Denver’s romance with the automobile.