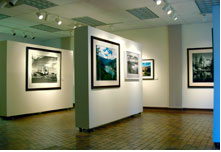 We are exploring the stories of the Golden Triangle neighborhood in Denver, Colorado. Our first stop is Gallery Roach, Denver’s longstanding historical photographers. While we talked with Jay Walla at Gallery Roach, it became evident that many of the buildings in our neighborhood are linked by the evolution of long standing Golden Triangle businesses – Gallery Roach has a historic connection to the Howard Lorton Galleries. (Evidence of the building’s use as a furniture store is still visible in the decorative tile flooring of the photo gallery.)

Otto Roach’s original photography business, founded in 1935 with his brother-in-law, Dutch Walla, was located in Lakewood. In 1967, Dutch moved the business to 1322 Lincoln, now the site of the Ralph L. Carr Judicial Center. Through a land swap with Howard Lorton Galleries, the Walla’s purchased the current building at 860 Broadway. Gallery Roach has been in the Triangle for 45 years!

Jay and his brother Dennis grew up in the family business, going on photography hiking trips, cleaning and mopping floors. They took over the business full time in the last decade and changed the front of the building to gallery space in 2003. Today, the business is largely based on laboratory and framing work for commercial firms, photographers, art consultants, and individuals. The Gallery showcases the evocative (and sometimes provocative) black and white photography of Otto Roach and Dutch Walla.

When asked to show us one of his favorite photos in the gallery’s historical collection, Jay Walla, after a moments pondering, said it was too hard to choose, but then showed us a photograph of the Denver Municipal Airport. Shot by Dutch Walla in 1938, the composition of prop plane, white-uniformed technicians and a Texaco fueling truck draws you into an era of early flight in Denver.

Inside Gallery Roach, a small vertical file cabinet contains a wealth of  8″x10″ black and white photo proofs. Organized in manilla folders labeled by hand, the collection of images represents the life’s work of photographers Otto Roach and Dutch Walla. Spanning from the 1930s to 1989, the photographs reveal places and events in Denver, Colorado, and the Golden Triangle’s history. Each image evokes a story, provokes a question, triggers a memory, offers an insight into a point in time – for those willing to read the richly detailed compositions.

A rich black night shot capturing the Studebaker dealership at Broadway between 12th and 13th, caught our attention – and led once again back to the Howard Lorton Galleries. The illuminated used car building (with the black convertible 1936 Ford Phaeton visible in the window) is gone now, replaced by the current Howard Lorton Galleries, but the two buildings to the right are still a vital part of the Golden Triangle neighborhood. With expansive windows, open floor space, and stately facades, the two remaining buildings speak to a time when Broadway and Lincoln were known as “Gasoline Alley” because of the wealth of automobile dealerships, garages, and auto supply businesses leading into and out of downtown Denver.