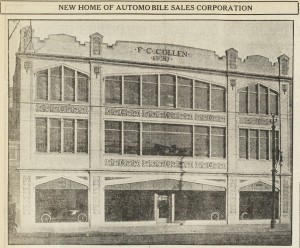 In continuing our exploration of the stories of the Golden Triangle neighborhood in Denver, Colorado, we are looking at the six degrees of Bill Cook and the Howard Lorton Galleries. In a previous blog, we looked at the history of the family business and now we will explore the history of the building and the development of the neighborhood. The history of Howard Lorton Galleries‘ three-story, terra cotta façade building tracks Denver’s love affair with the automobile and the acceleration of automobile dealerships down Broadway, or “Automobile Row” in today’s Golden Triangle neighborhood. Denver’s first automobile was delivered in 1899. (The first license issued to a woman was to Bill Cook’s grandmother, Wilma Lorton. The first license issued in Denver can be seen at History Colorado.) At the end of 1904, there were 500 licensed automobiles, and by 1919 ownership had exploded to 104,865. By 1910, Broadway from 14th south to Cherry Creek was devoted to automobile sales. Dealerships were fiercely competitive for customers and a new architecture, dubbed “cathedrals of commerce,” emerged to showcase and sell the automobile.

The building, designed by architect J. M. Hyder, had a unique elevator-less system of getting cars up to the quick repair service on the second and the overhaul pits on the third floors—a concrete viaduct. Seventeen feet wide at its narrowest, it had an easy grade from Lincoln Street to the second floor on the back of the building and a sloping driveway to the third floor. A 1921 Rocky Mountain News article, touted the new three story Franklin and Studebaker building at 12th and Broadway as, “One of the most compact and most convenient sales and service buildings to be found anywhere in America… President F. C. Cullen is not alone in being proud of their new building, which a thousand or more Franklin and Studebaker owners in the city and all of Denver’s motor tradesmen consider a substantial addition to the attractiveness of the Rocky Mountain region’s main ‘Automobile Row’ and a credit to the motor car industry.”

In between the eras of the Franklin Studebaker dealership and the Howard Lorton Galleries the building served other dealerships and purposes: Sam Marcus, who worked for Cullen in the 1920s inherited the business and Marcus Motors sold the first Mercedes in Denver along side the Studebaker. When the Studebaker Corporation evaporated, Capitol Chevrolet, located further north on Broadway, moved to the building and took over the corner lot as well. Capitol was eventually bought out, but the dealership left quickly after running afoul of Denver District Attorney, Dale Tooley. A ski shop, started by entrepreneurs from Boston, occupied the building briefly, but found the business couldn’t compete with Gart Brothers down the street and the immensely popular Ski Chalet on Acoma Street. They sold their lease for $1 and decamped for Boston, leaving an empty space.

By this time, the viaduct from Lincoln to the back of the building was enclosed and served as a parking structure and service area after World War II. Dutch Walla, of Roach Photography, was operating his business there and renting part of the space to the Community College of Denver. The College vacated their space when the Auraria campus was opened and Dutch was left with a partially empty building.

Then came Bill Cook with his visionary idea of a new building incorporating the former Studebaker building for the sale of fine furniture and design at the Howard Lorton Galleries.

Evidence of this illustrious past can still be seen by those willing to explore. Owner Bill Cook continues to use the concrete viaduct from Lincoln Street to move furniture and art between floors instead of motor cars; a Studebaker sign still graces the building on both the Broadway side and on the alley; and the north wall of the original Franklin Studebaker building is visible in the Galleries’ first floor showroom.