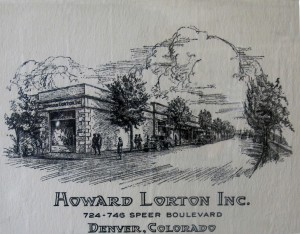 In continuing our exploration of the stories of the Golden Triangle neighborhood in Denver, Colorado, we are looking at the six degrees of Bill Cook and the Howard Lorton Galleries, Denver’s longstanding dealer in fine furniture and accessories. Bill Cook, at age 23, unexpectedly found himself the head of the family business, Howard Lorton Galleries in the Golden Triangle. He has “lacquer in his veins” and is still happily buying and selling fine furniture and offering professional design services and continuing to establish a loyal clientele. The route Bill and his family took from their beginnings in Colorado to the present provides a fascinating view of the evolution of Denver and the Golden Triangle. (The authors know that there are many “Bill’s” and “Will’s in the account – but that is how it worked out!)

Family History: From China to Bikes to Lacquer
Bill’s mother’s family came to Colorado, as did so many others, because of “lung” issues. Her father, Will Felker, sold china to miners in Leadville in the late 1800’s, where Wilma was born. When the miners said they needed bicycles to get to their mine jobs, Will started a bike shop, and later opened one in the young city of Denver at 15th and Tremont. When automobiles arrived on the scene he carried them in his shop and sold the first “horseless carriage” in Denver! Wilma had the first driver’s license issued to a woman in Denver. Sadly, his love of cars was Will’s undoing, as he and another man were killed while racing cars at Overland Park in 1907.

Howard Lorton, Bill’s grandfather on his father’s side, came from Illinois, and young Howard worked at the St. Louis World’s Fair. His family moved to Denver while Howard was a teen. In 1910, young Howard Lorton married Wilma and he became a buyer of office furniture at Denver Dry Goods. Howard and Wilma had two children, Bill and Lois.

Bill Cook did spend time living in Denver with his grandparents while his father was stationed overseas. He went to East High School and then Stanford for college. After Bill graduated from Stanford in 1960, he raced back to Colorado in time to see Arnold Palmer will the U.S. Open at Cherry Hills. Bill was armed with a degree in architecture and started a job with Rodney Davis. Rodney’s firm, Fisher & Davis, designed many fine buildings in Denver. Bill Cook had only been back in Colorado for a week when his uncle, Bill Lorton, died, and grandfather Howard Lorton was again running the business. A few months later, Bill Cook spoke to his grandfather about helping out at Howard Lorton Galleries. He left his architecture job and was hired. Exactly one year later in 1961, Howard Lorton passed away and left his oldest grandchild running the business. With the help of the expert staff on hand, Bill Cook made the transition. Howard and Wilma started Howard Lorton Galleries on Speer and Acoma in 1927. (Interestingly, the owner of the site had hedged his bets architecturally by building a structure that could serve as a car dealership in case the furniture business didn’t work out. It did work out, but 50 years later cars were in fact being displayed at Rickenbaugh Cadillac.) Their new Howard Lorton business invitation promised “better” furniture and a designer on staff—values which helped them survive the depression and the difficulties of WWII, and to expand after the War. Bill Lorton, their son, came into the family business as well. Howard and Wilma’s daughter, Lois, married Frank Cook, who was in the Air Corps, and they lived in California where Bill Cook was born.

At the time, Howard Lorton Galleries was still in the Speer and Acoma building and by the mid 70’s, Bill Cook had also assembled three properties to the south on what was then Acoma Street. The Rickenbaugh family started a Cadillac car dealership on the Broadway side.

Originally, Howard Lorton customers could park on both sides of Speer. When that changed, Lorton’s used the parking behind the Texaco station then located at Speer and Broadway. By the late 1970s, with increasingly difficult parking and an aging building, Bill looked around for new space. He looked all over, including south on I-25, but settled on the current site between Broadway and Lincoln on 12th Ave. At the time, Howard Lorton Galleries was also operating a patio furniture and drapery workshop in a leased building on Broadway and 9th. (now Gallery Roach/Roach Photos Inc) and Dutch Walla and Otto Roach were operating their photography business on Lincoln between 11th and 12th behind the then Studebaker dealership on 12th and Broadway.

Bill orchestrated an amazing multiple real estate transaction in 1978. When the ink dried, the Rickenbaughs had the whole site at Broadway and Speer, Dutch Walla (Roach Photos Inc) had the former patio furniture building with an option to buy at 9th and Broadway and Howard Lorton Galleries was the proud owner of the current site at 12th and Broadway and at 12th and Lincoln where Roach and Walla had operated their photography business.

Building a new home for Lorton Galleries
Bill has seen the Golden Triangle evolve from an area of automobile dealerships and repair shops to the diverse neighborhood of today. Now he looks out of his large corner window on Broadway to see History Colorado and the Daniel Libeskind designed Museum Residences. But he knows, that behind it all, there are many hidden architectural and personal stories ready to be told. The Howard Lorton Galleries opened on the current site in 1982, thirty years ago in May. Since then, in spite of economic challenges and changes, the business is still a thriving family business with a loyal clientele. The fourth generation is now in the business with Bill’s son, Will, working full time. His daughter, Cathy Hitch has been involved, but now does limited marketing while being a full time mother and Episcopal priest in Golden. Bill is still the buyer and he focuses on buying American-made as much as possible. He credits his architecture training for his appreciation of style, color, scale and form. It was time to design a new building on the former Studebaker used car lot—one that would integrate the then existing Studebaker showroom. Bill worked with his architect friend Jim Bischoff. Jim worked for Payne & Bischoff, a much admired firm in California in partnership with Warren Callister. Cook and Bischoff both admired a building designed by Warren Callister in Copenhagen, Denmark, that served as the inspiration for the new structure. The new building had to be open on the inside, meld into the adjoining older building, have multilevel daylight throughout and provide views of all the layers one from another. Bischoff provided a splendid paper model and the job commenced.