This is one in a series of newsletter articles from the Golden Triangle neighborhood in Denver, Colorado about the founders of GTA. Member and past Executive Director, Margerie Hicks interviewed Mickey Zeppelin for this article. Thanks to Margerie and Mickey for this great history! 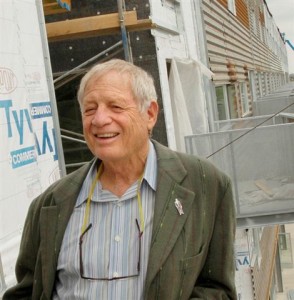 The Golden Triangle Neighborhood Association (GTNA), later changed to Golden Triangle Association (GTA), was reorganized in 1993. The original organization formed a decade earlier by the first president, Alan Kiel. GTNA was reactivated after developer Bruce Berger purchased sizeable holdings from then Public Service. Founders of the reformed organization were Bruce Berger, Alan Kiel, Dick Eber, Marshall Fogel, Kent Rickenbaugh, Herman Feldman, Dave Marquardt, Lewis Sharp, Chris Vogts, Jim Nordlie, and Mickey Zeppelin. The area suffered in the 1980s recession—the economy had effectively brought the development of multi-story buildings to a halt. Then the fatally damaging blow came when the proposed convention center location in the Golden Triangle was moved to its present site, which was the result of recommendations from the Urban Land Institute (ULI). Land values had declined from over $100 to under $15 per sq. ft. One early issue discussed by the founders was the elimination of one-way streets (sound familiar?). Another item on the early agenda included requests for allocation for street improvements, which was met with the now familiar refrain from the city, we don’t have enough money. A third item was establishing the boundaries of the Golden Triangle. Initially, Lincoln and Broadway were not included, but it was decided that the commercial character of those streets and the specific businesses located there were critical to making the Golden Triangle concept work.

An old building at the corner of 12th and Acoma (where the CELL museum is now located) was occupied by a business called Radiator King. The city wanted to raze the building as part of surface parking lot improvement for the nearby cultural facilities. Since so many buildings had already been torn down for parking lots, the association wanted to save the Radiator King building and appealed this concern to the city. GTNA lost that battle, but a few years later plans for the new art museum, CELL, residences and parking building brought a much better use for that location.

Dick Eber and Mickey Zeppelin agreed to lead the effort to form a business improvement district (BID). The district would allow property owners to tax themselves for improvements such as landscaping and lighting, which would enhance all property values. It eventually took about four years to finalize the formation of the Golden Triangle BID. However TABOR laws also required a vote of property owners to approve the funding. There were two elections conducted in two consecutive years, but property owners voted against the funding both times and the BID was dissolved after a designated five years.

It was decided that GTNA would ask the city to help with planning and possibly funding underground utilities. Ideas were exchanged about the need and funding for administrative and consulting support to carry out the plans. All board members agreed to contribute $200 to start GTNA. Kent Rickenbaugh agreed to pay $1000 for initial start-up expenses. Bruce Berger agreed to continue providing clerical support.

Just prior to the formation of the new GTNA, the cultural institutions of the Central Denver Public Library, Colorado History Museum and Denver Art Museum had formed the cultural complex committee to coordinate joint programming and development of the institutions. A new Triangle committee had agreed to join forces with the cultural complex and create a joint task force to establish a facility coordination for the two organizations. The cultural complex had retained the architectural firm Scott Venturi Brown to develop a plan for the area. The plan included the vacation of a portion of 13th Avenue to create a park, which included sculptural wire towers along the parkway.

All of this was conceived and initiated in one meeting in August of 1993. It was a time of visionary thinking and high energy. The idea of the three organizations working together to create this innovative joint enterprise was unequaled anywhere in the area. A cultural complex would preserve and promote the culture of the west. Bruce Berger had previously petitioned the city to designate the Golden Triangle the cultural district, but his attempts were shot down because other groups, such as the Silver Triangle and Capitol Hill, also wanted that designation. But Mr. Berger thought it was appropriate to call the area the cultural district anyway, without the City’s blessing.

Looking to the future, GTA needs to continue to be involved in the big picture. The economy will effect development and retail interests, city support will change with its available resources. GTA must anticipate and act upon the major issues that will affect property values and quality of life in the Golden Triangle. Careful watering, nutrients, and weeding will produce a bountiful harvest of the seeds that were planted in 1993.

Mickey Zeppelin is a Principal of Zeppelin Development, Inc. and was the developer of several condominium buildings in our neighborhood. He has been involved from the beginning of the GTA and has been described as the “grandfather” of the Triangle.