In our journey through the history and development of the Golden Triangle, we want to explore more of the long time businesses located here. These businesses, and there are more than you would expect, have operated through the many changes undergone by the Triangle. 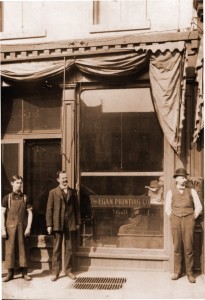 We spoke to Joe and Bill Egan, two of the family members who still own and run Egan Printing at 1245 Elati Street. Egan Printing may be the sole surviving manufacturing business in the Golden Triangle. It is also certainly one of the oldest family-run businesses in Denver, since 1891, now with 4th and 5th generation family members in charge. Egan Printing currently has 17 staff, 8 of these are family members. They specialize in business printing and continue to provide printing services for a substantial amount of Denver’s business community. The company was founded in 1891 by the great-grandfather of the 4th generation, one Thomas C. Egan. Thomas had been a typesetter at the Rocky Mountain News until he lost some fingers in a streetcar accident. With the accident settlement from Denver Tramway, he set up a printing business at 1533 Market Street. Over the years, the firm prospered and moved several times, ending up at Speer Blvd. and Stout Street in about 1941. Thomas Egan’s son Ed Egan ran the business until 1968, then his sons Tom and Jim worked in the business until the 1990’s and their four sons, Bill, Howard, Steve, and Joe Egan now own the firm.

Tom’s son Bill Egan attended Metro State, graduating in 1974, in the pre-Auraria Campus days when the school operated in buildings throughout the Triangle. For example, Cadillac Lofts housed the Business Department. They remember the unofficial “student union” at “Burger Chef” at Fox and Colfax and the drinking “student union” at the White Mule on the southwest corner of Elati and Colfax. The Egans sensed that Metro really accelerated the decline of the residential aspect of the old community, with up to 20,000 students flowing in and out of the area every day, drastically changing the neighborhood.

In 1981, some developers had their eyes on the Egan property at Speer and Stout. Having decided that the Triangle area was “downtown” enough, Tom and Jim Egan swapped their 2 lots on Stout Street for the developers’ six lots and a new custom building on Elati Street. Coincidentally, Joe Egan’s wife’s Great Aunt Dorothy was actually born in housing located on their current site. At one time, the block held row houses three deep between Elati and the alley, next to outhouses and accessed by sidewalks. Presumably, these would have looked much like the duplex to the north of Egan printing. The residents were largely Irish and worked at the Rio Grande maintenance and Burnham shops west of Speer. Most attended St. Leo’s Catholic Church, now gone.

When Egan Printing relocated, the Golden Triangle wasn’t “golden” and hadn’t been thriving for many years. Joe and Bill remember the area as one where “nothing was happening.” In fact, shortly after Egan Printing relocated, the Denver Urban Renewal Authority tried to have the area declared “blighted” so that they could use their power of eminent domain to buy land with an eye toward clearing land for a desired convention center. DURA’s project would have exempted both Egan Printing and nearby A&K Axel from a proposed ban on manufacturing. DURA’s proposal failed, and eventually Public Service was forced to auction off its large land holdings, and the neighborhood started to become more residential.

The Egans have seen many neighbors come and go in the nearby buildings over the years and can trace much of the history of the Triangle through these memories. Some of the examples they mention: The Cesar Chavez building at 13th and Fox was the site of the Denver Public School book depository, a brick building that came down in showers of bricks all over the neighboring buildings and parking lots when it was demolished.

The Egan’s Great Aunt Dorothy Morrisey, who was born on the site, took her niece to deliver food to Neil Finn, a widower living a little shack on 14th and Fox, on the alley, behind what was once “Jake’s Auto Parts.” In the little house with the roses on Fox lived Seamus and Katherine, refugees from Hungary, who ran parking lots “S & K Parking” during Metro States days. The roses and the house are still there and it is owned by a nephew of the original owner.

At one point, there was a down and out former opera singer living in his Rambler on the street.

The residents in the duplex to the north of Egan Printing are members of the same family that has owned the property for many years. The Egans have seen a number of generations of children grow up next door to their company, and children continue to live there now.

Mr. Sears owned Sears Refrigeration at 1240 Speer. A small dapper man, he enjoyed shooting squirrels off the phone and electric wires. His firm also rebuilt restaurant refrigeration compressors long after the originals were discontinued. The office equipment dated from the mid 30’s and was almost a museum. The building, now empty, is still owned by Mr. Sear’s heir, a mechanic in his shop.

The building at 1235 Elati housed Malman & Malman, a legal firm specializing in divorce cases. They then rented the building to Duane Chapman (now “Dog” of TV Bounty Hunter fame) for his bail bonds business. Both businesses had their share of colorful clients and visitors.

Denver Weatherhead operated in the building at 1210 Speer. This was a hat cleaning business, busy in the days of hats on every man’s head. It closed in the mid 70’s and is still occupied by the owner’s great nephew. You can still see the “Denver Weatherhead” sign painted on the Speer side of the building.

By coincidence, Craig Nassi taught Joe Egan’s children in middle school before he launched his developer phase and built the Belvedere (and Prado and Beauvallon.)