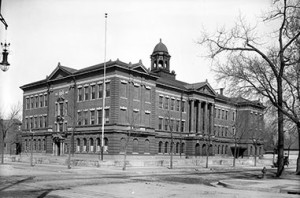 We continue to explore the wonderful old buildings in the Golden Triangle, particularly as they are repurposed in later years. We recently spoke with brothers Dick and Alan Eber, who first saw the empty Evans School about the time it went on the auction block in 1974. They say they feared this beautiful and historic building would be demolished if any of the other bidders bought it. At the time, under Mayor Pena, there were fewer restrictions on tearing down buildings, regardless of age or value. A small increment in bid over the next highest bidder delivered the building to them to preserve. Today Dick, Alan along with Dick’s son Michael, as project manager, run the building.

Inspired by the 1893 Chicago Exposition, then Denver Mayor Robert Speer began a program to beautify Denver, which included parks, street parkways, and attention to public school buildings. The architect chosen for the Evans School was David W. Dryden, who designed over 20 other Denver school buildings during his career. Evans was built in the Classical Revival style popular at the time, opened in 1904 and served as a school for nearly 69 years. It was named after Denver businessman John Evans, an early territorial governor and founder of University of Denver. The school had about 700 elementary students at its peak. Hearing and sign language departments were added in 1928 and 30. Evans became the first Denver school to serve handicapped students. Evans School eventually closed its doors in the early 70’s and went on the auction block.

When the Ebers took possession of the building, it was still in reasonable operating condition, with lights, water, etc. A number of houses on the west side of the old building were still occupied, although the area had been in decline for some time. The Evers turned the playground to the north into a parking lot. The jungle gym is still on site but cannot be utilized due to modern day safety rules. Michael remembers a metal swing set that could have swung a full 360 degrees with enough momentum. A basketball frame still hangs on the north wall and the original school flagpole stands in the southeast corner of the property.

The original plans (on linen!) for the school have been preserved in an archival fashion with selected documents scanned to ensure access. The school was designed with some unique structural elements. For example, the coal fired heating system provided hot water for the washrooms and radiators, but also forced warm air up and out vents, which are visible under the dentil molding along the roof line. This served to provide good convection in the days before air conditioning. Since Evans was the only school to remain operational all summer, this was an important feature, and is similar to the heating and cooling system found in the Eastern Market in Washington D.C.

Interestingly, the Ebers did not find any structural elements that would have aided accessibility for the students with physical challenges. A flat terrace on the west side of the building provided room for students’ calisthenics. During this educational era, left-handed students were “encouraged” to become right-handed. Michael Eber believes that blackboard placement on the east and west facing classrooms dictated a desk arrangement to ensure that the light coming through the windows did not cause a shadow from the student’s right hands as they moved across the paper. In the 1950’s, an auditorium, for around 300 was added. The Ebers plan to refurbish and reinstall the original seats. 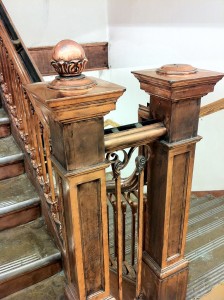 The building, which was placed on the National Register of Historic Places in 1980, is currently undergoing more restoration. The Ebers have been collecting names and phone numbers of people who have had personal connections to the building and they envision a permanent display to highlight the building’s history. One current example is Mr. Joe Bargas, who lives at the Acoma Apartments across from the school and did maintenance work as a young man in the Evans School. For additional information and pictures of the building, refer to denverevansschool.com.